Croatia might have lost their match at the Beach Handball EURO 2021 in Varna on Thursday, but Andrea Simara has not lost her sense of humour.

Her team has gone down narrowly in the women's main round opener against Denmark, the defending champions, losing in a shoot-out.

“Indoors we were winning,” Simara says with a bittersweet smile, referring to her previous match against a Danish national team.

Seven months ago, Simara was also part of the Croatian team that stunned Europe with their unprecedented run to the semi-finals of the Women’s EHF EURO 2020 in Denmark.

The result against Denmark was different last time. In the bronze medal match, Croatia crowned their eye-catching performance by defeating the host nation 25:19 – with Simara as left wing scoring once.

“That was an amazing game, Denmark didn’t score for 20 minutes,” Simara remembers.

History has not repeated itself on Thursday.

Denmark, with Frida Ulrichsen contributing 22 points, dominate the first set (24:15) but fail to close out the win in the second, allowing Croatia a last-second equaliser and even a golden goal, 25:24. But Denmark come out on top in the shoot-out, 9:8.

“A tough game,” says Simara, who comfortably scores her two points in the shoot-out. “The first set we were too bad in defence and we missed a lot of easy shots.”

Simara stems from a sports-minded family in Croatia. Her granddad played handball for ZRK Samobor, her father pursued a football career, and her mother was into athletics.

No wonder a sports career has always been on the cards for the 24-year-old Simara, who is studying at the Faculty of Agriculture at the Zagreb University.

Already since her 17th, she has been combining her indoor career with playing beach handball.

But when she looks up to the crisp blue skies above the Black Sea coast, she tends to prefer beach handball for now.

“Here, in the summer, it is amazing because of the atmosphere, the music, the team,” she smiles. “It’s amazing.” 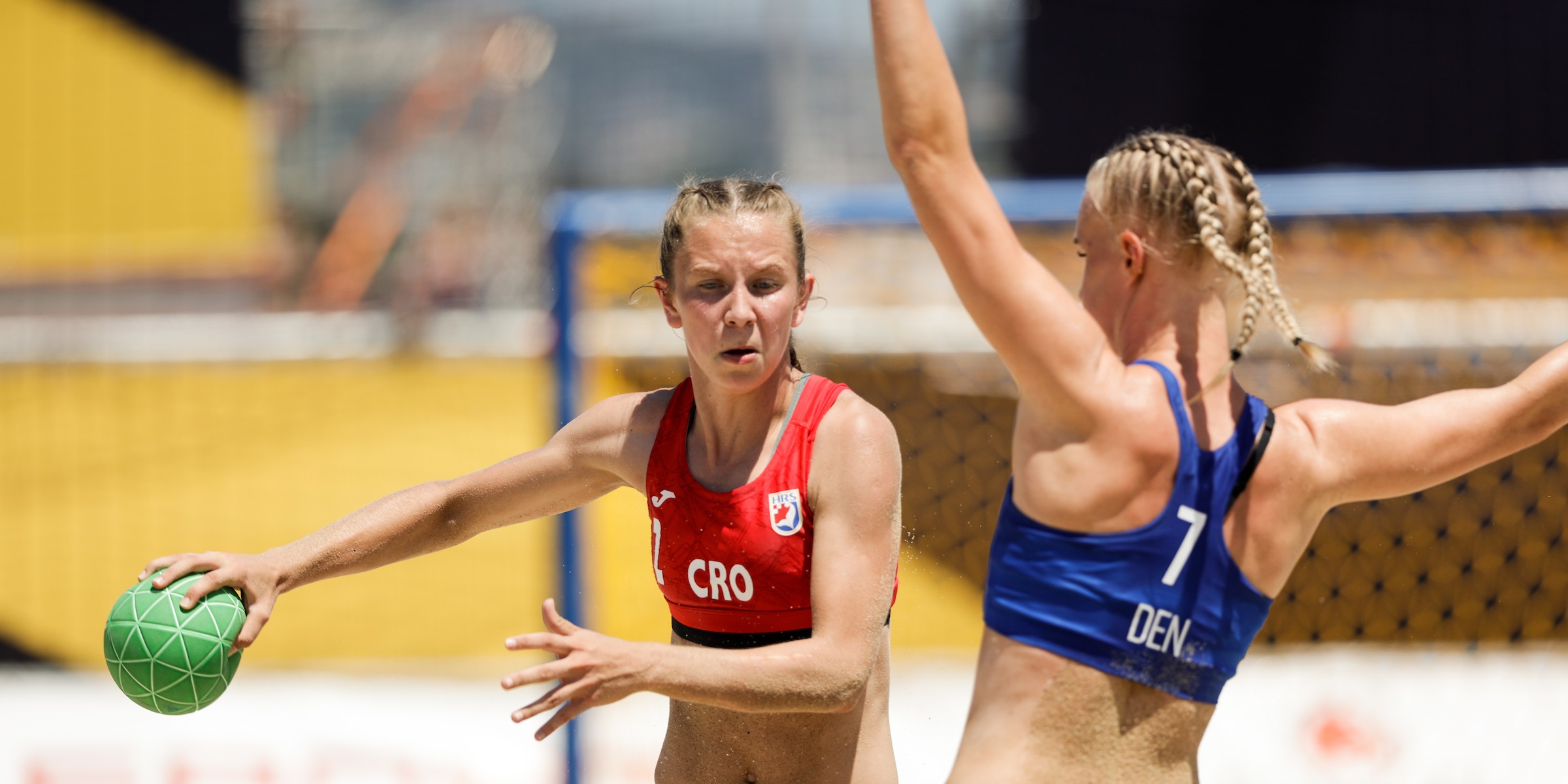 We want to get to the finals, so we get a ticket for the world championship and a medal. We want it all.
Andrea Simara
Croatian women's national beach handball team player

There was not much missing or Simara would not have had the choice anymore between indoor or beach handball. A complicated fracture of her left lower arm more than two years ago posed a serious threat to her playing career.

However, the scar is the only reminder of her injury.

Her return to the courts has been successful, not just with the national team.

With her club team, HC Lokomotiva Zagreb, she made it all the way to the final of the European Cup Women 2020/21, where they lost 60:59 on aggregate to Rincon Fertilidad Malaga.

“With the club, it was a perfect one, last season,” the left wing says. “I am hoping for next season to be as good as this one.”

The arm injury forced her to miss the 2019 edition in Poland, where Croatia finally made it to the semi-finals again, eight years after winning the title at their home championships in 2011.

No wonder she is hoping for another Croatian appearance among the last four this weekend.

“We want to get to the finals, so we get a ticket for the world championship and a medal. We want it all,” she says.

However, her tournament went off to a bad start on Tuesday. On her 24th birthday, she got a red card in Croatia’s first game against Italy and had to sit out the second against Norway.

For Simara, Denmark and Norway are the main gold favourites, but Croatia have an advantage.

“We are used to these conditions because there is sun in Croatia, also. The Nordic teams like Denmark or Norway are not used to this, but they are doing well,” she says.

“In my opinion, they are the two best teams here. And then we come.”

REVIEW: Spain and Portugal split first-place honours on Sunday, with Malaga winning on the men's side and Leca from Portugal claiming the wo…

Both finals to feature Spanish-Portuguese clashes

DAY REVIEW: the line-up for the finals is complete after tight matches on Saturday, with four teams from the Iberia progressing to the medal…

REVIEW: The women's reigning champions take a loss and gritty performances pay off as some quarter-final spots go down to set-win difference…

Six EHF Champions Cup memories to get you ready for Sicily

NEWS: We turn back the clock on the past events in beach handball’s final European competition of the season