“Martin! Martin! Take it easy, it is 10:0,” a spectator at the Beach Handball EURO 2021 in Varna shouts from the stands at the sun-soaked court 2.

Martin Vilstrup Andersen looks over his shoulder and smiles. He wipes sweat off his forehead but ignores the advice.

‘Taking it easy’ does not appear in the vocabulary of one of the sports’ biggest stars.

“We never settle for less. We want to give it all,” Vilstrup Andersen says after his Denmark has defeated France 2:0 with remarkable ease in Friday’s main round closer.

Denmark have not got to 20:0, but the second set against France ends 23:7 and that is impressive enough – as is the team’s whole week so far.

Arriving on Bulgaria’s Black Sea coast as the defending champions, Denmark seem even stronger than two years ago, coming unbeaten through the preliminary and main rounds while dropping just a single set along the way.

Next up are Portugal in Saturday’s quarter-final.

In fact, Denmark are stronger than in 2019, confirms Ronnie Vilstrup Andersen.

“Of course, success builds more success,” Martin’s older brother says. “We had a finals tournament in Spain a month ago where nine players participated. We won that one through hard work.”

Ronnie refers to the ebt Finals 2021 in Torrox, where HEI Beach Handball became the first team from Denmark to win gold.

It has turned out to be the perfect build-up for the Danish national team.

“The group we are now has stayed together for a couple of years,” Martin says. “The preparation in the Danish national team is that we are together for two weeks, that is our preparation. Other teams get far better preparation, so it is really important that we stay the same group.”

It is unity that counts. Especially in a sports like beach handball, where decisions need to be taken in split seconds, it comes down to optimal teamwork, to flawless connections between teammates. 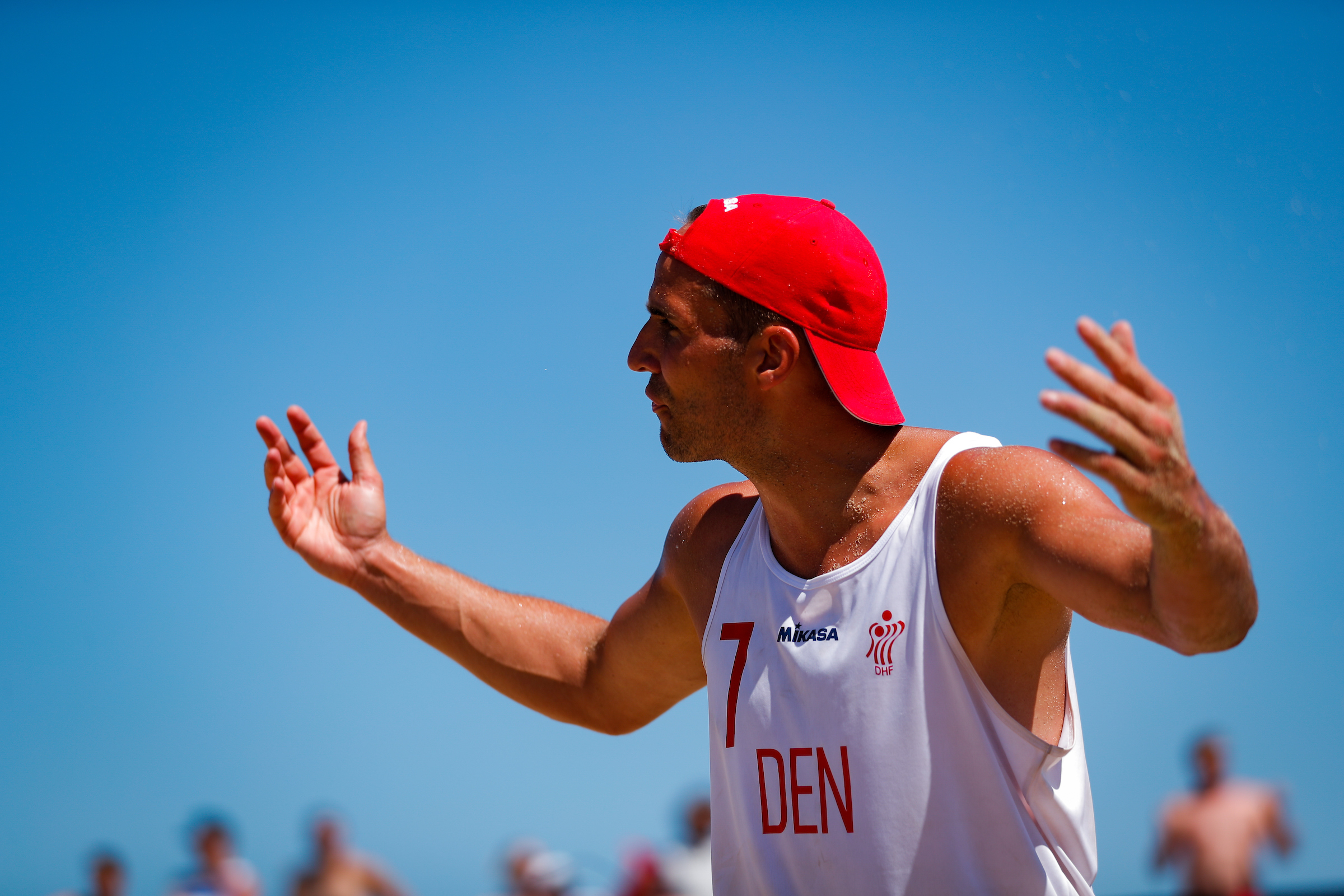 If I could choose, I would play it the whole year around. I am pretty much in love with the beach handball spirit and the fair play.
Martin Vilstrup Andersen
Denmark national beach handball team player

Denmark are such consistent group of players that know each other very well.

And their family bond makes the Vilstrup Andersen brothers go one step beyond.

“It is great to share this experience with Martin. I know Martin better than anyone,” Ronnie says.

“There have been situations in this tournament where we just look at each other and know what the other is thinking. In that sense we can help each other and help the team,” he adds. “It is a privilege. I rather play with him than against him.”

Both have pursued an indoor career as left backs: Martin joined Eintracht Hildesheim in the German third division last season from Halden Topphåndball in Norway.

And Ronnie has been with Århus for a long time, even playing in the EHF Champions League for the Danish side and scoring once, as a 20-year-old prospect against Veszprém in December 2005.

Meanwhile, it is all about beach handball between the brothers.

“He can’t talk about anything else,” Ronnie says, and laughs. “I try to change the topic, but he keeps returning to beach handball. He is obsessed.”

Martin briefly looks at his brother, then says dead serious: “That is the truth. If I could choose, I would play it the whole year around. I am pretty much in love with the beach handball spirit and the fair play.”

Not even a recent injury can keep Martin away from the sandy courts.

He underwent knee surgery and returned playing for Hildesheim only in May.

“Nothing can put me out when we are playing beach handball,” he says. “Of course, I had surgery and I had to do rehab afterwards. But I am good, I am fit. The right knee, no worries about that. I am not going to use it as an excuse if I do bad.”

It is great to share this experience with Martin. I know Martin better than anyone. There have been situations in this tournament where we just look at each other and know what the other is thinking. In that sense we can help each other and help the team. It is a privilege. I rather play with him than against him.
Ronnie Vilstrup Andersen
Denmark national beach handball team player

Still, Martin is Denmark’s leading scorer coming into finals weekend, with 99 points. Two years ago, he was also the most productive player on his team’s road to gold, with 120.

“In Poland it was maybe a little bit surprising that we went through to the final and actually won the gold medal,” he says. “I think now people see us a real threat for the title.”

They accept the role of one of the main gold favourites, but the Vilstrup Andersen brothers will not take anything for granted.

“The confidence is high, we are the defending champions,” Ronnie says. “But if we perform at 90 percent, there is a lot of teams that is going to beat us. So, it is easy: top perform and see what happens.”

Next Article Beach EURO Live: Title holders Denmark back in both finals