To mark 99 days before the start of the EHF Beach Handball EURO 2021, the European Handball Federation has revealed the four preliminary round groups for the competition.

The 12th EHF Beach Handball EURO will take place in Varna, Bulgaria between 13 and 18 July, following the Under-17 event which will be played in the week prior.

In total 19 men’s and 18 women’s teams will fight for the title on the sands of Varna, with federations distributed based on their beach handball ranking. The top three nations in each group at the end of the preliminary round will advance to the main round. 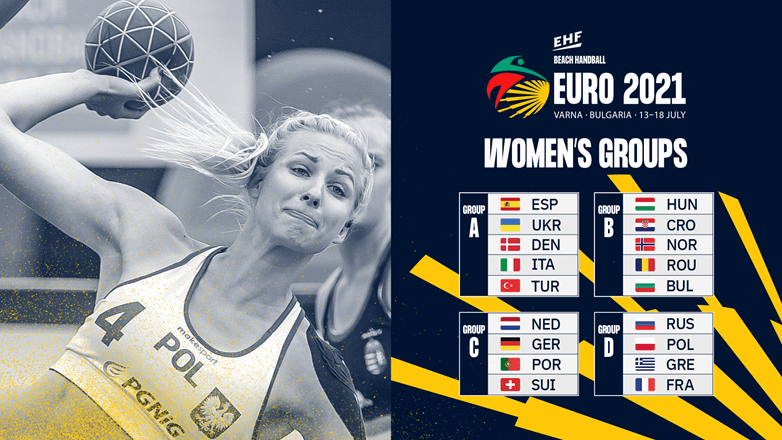 Reigning champions Denmark face two previous gold medalists in group A, having been draw against Ukraine – who won the first EHF Beach Handball EURO in 2000 – and Italy, who triumphed in 2009. Beach ranking leaders Spain and Turkey complete the line-up in group A.

Two of beach handball’s most successful nations will go head-to-head in the preliminary round with two-time winners Croatia (2007 and 2011) and Hungary (2013 and 2015) set to meet in group B. Norway, themselves winners of the competition in 2017, hosts Bulgaria and Romania complete a fascinating group. 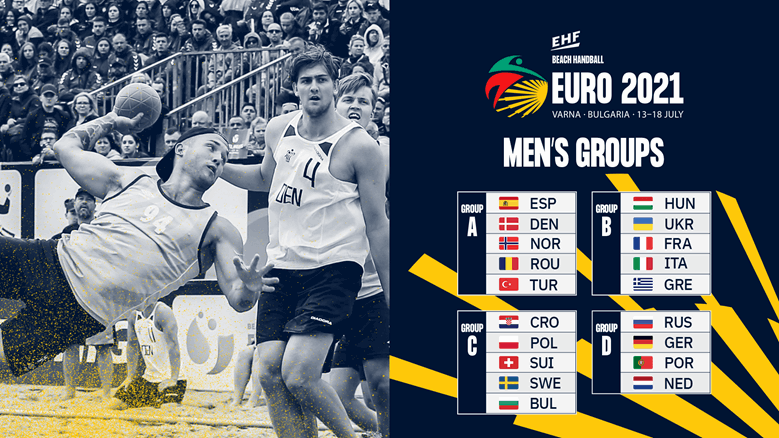 Having secured their country double-gold at the 2019 edition in Poland, Denmark’s men’s team aim to regain their title in Bulgaria. However, the Danes face a stern test of their credentials having been handed a group containing three-time winners Spain (2002, 2006 and 2017) and Norway, who were runners-up in Poland two years ago. Romania and Turkey will also be aiming to make it through from group A.

Bronze medalists from 2019 Hungary were placed into group B alongside Ukraine, France, Italy and Greece.

With four gold medals, no country can compete with Croatia’s record in the men’s competition and the winners from 2009, 2011, 2013 and 2015 will be aiming to make it five titles in Varna. The Croatians were drawn into group C and face competition from Poland, Switzerland, Sweden and hosts Bulgaria.

No side has won more medals in the competition than Russia’s seven, and the two-time champions (2004 and 2007) will have their eyes set on making that eight in Bulgaria but will need to get past Germany, Portugal and Netherlands in the preliminary round first.

EHF Secretary General Martin Hausleitner said: “We are looking forward to welcoming Europe’s best beach handball players back to the sand for what will be a milestone event as our first Beach Handball EURO in partnership with Infront and DAZN.

“The cooperation will enable beach handball to be given a level of exposure across Europe that has never been seen before as we continue to make important strides in strengthening our commitment to growing beach handball.”

Previous Article Aalborg to play catch-up with Porto in MOTW

Next Article Five conclusions after the European League Women quarter-finals

NEWS: The semi-final line-up for the women’s and men’s events at the ebt Finals 2021 has been set

NEWS: Familiar faces on-song in Torrox ahead of the all-important weekend elimination matches

Reigning champions eliminated on day one

NEWS: The ebt Finals in Torrox got off to a dramatic start on Thursday as beach handball made it’s long-awaited return

ebt Finals throws off in Spain

NEWS: The start of the summer season of beach handball throws off in Torrox on Thursday

NEWS: The start of the summer season of beach handball will be screened live on the Home of Handball channel on Twitch