Bulgaria have grabbed the last ticket to the Men's EHF EURO 2024 relegation round, beating Moldova 26:25 in a nail-biting bronze medal match at the IHF/EHF Trophy 2021 in Tbilisi on Saturday.

Bulgaria as the third-ranked team join Georgia and Cyprus, who qualified for the relegation round of the European Championship 2024 a day earlier when they reached the final of the IHF/EHF Trophy.

The tournament hosts ended up lifting the cup, outscoring Cyprus 32:18 in the final, mainly thanks to a series of nine unanswered goals in the first half and to Georgi Tskhovrebadze's 12-goal outing.

The other participants are Luxembourg, who were directly seeded, as well as Belgium, Turkey, Finland and Latvia, who were the four worst fourth-ranked teams in the EHF EURO 2022 qualifiers.

The draw date for the four play-off pairings of the relegation round will be announced by the EHF in due time. 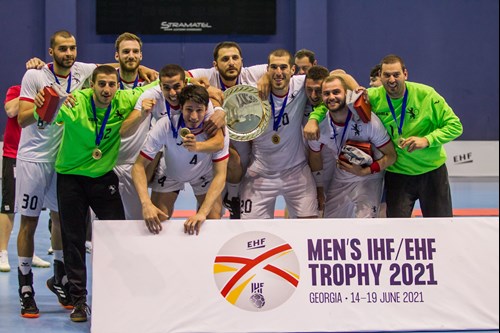 Earlier Saturday, the 5/6 placement match between Azerbaijan and Andorra was called off after several players from Andorra had tested positive for Covid-19.

The champions were also the undisputed leaders of the IHF/EHF Trophy 2021 All-star Team, with four of the seven playing positions occupied by Georgia, followed by two for Cyprus and one for Bulgaria.

Georgia centre back Irakli Kbilashvili was awarded the title best player of the tournament.

REVIEW: The European champions earn a decisive 34:22 win in the last match of the competition won by Hungary

SEMI-FINAL REVIEW: The two teams reached the final of the IHF/EHF Trophy 2021 in Tbilisi on Friday

DAY REVIEW: The teams join Cyprus and Georgia as the line-up for the semi-finals of the tournament in Tbilisi has been confirmed

NEWS: The match, which was postponed in January, will be played on 27 June in Pontevedra, Spain

DAY REVIEW: Both teams have won their respective group at the IHF/EHF Trophy 2021 after a second straight win on Tuesday

Cyprus and Georgia on top after day one

DAY REVIEW: The Men’s IHF/EHF Trophy 2021 opened with victories for Cyprus and Georgia on Monday

PREVIEW: Three places in the EHF EURO 2024 relegation round up for grabs in Georgia