Quarter-finals set in Varna after thrilling end to main round

Eight men’s and eight women’s teams enter the concluding weekend of the Beach Handball EURO 2021 in Varna with their medal hopes still alive.

The quarter-final pairings have been set after the main round in both competitions ended with several close calls on Friday.

The quarter-final pairings are as follows, in the men’s event:

In the women’s event:

A thriller saw the men’s runners-up from 2019 scrape through: Norway lost the first set of their must-win match against Ukraine before turning the tide just in time and winning the match in a shoot-out.

That meant heartbreak for Hungary, the 2019 bronze medallists, who did well to beat Spain in a simultaneous match but still went out due to their earlier defeat against Norway. 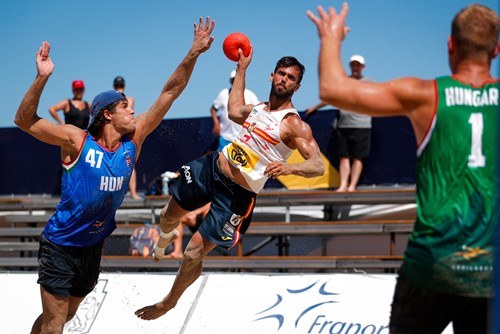 On the men’s side, seven quarter-final spots had already been confirmed after the first day of main round action Thursday, though the final group rankings were only determined on Friday.

The two groups were won by Denmark and Croatia, who both seem strong contenders to go all the way.

However, with the knockout format applying from now, everything is possible with the quarter- and semi-finals set for Saturday.

Denmark and Germany dominate on women's side

On the women’s side, things were obviously less clear ahead of Friday’s play, with all teams having to take the court two more times.

The morning matches, with rather unexpected defeats for the likes of Norway, Netherlands, and Croatia, were the build-up to an exciting afternoon session, that saw teams like 2019 semi-finalists Croatia as well as 2018 world champions Greece stumble over the last hurdle and go out.

Germany and Denmark were the dominating teams, confirming their status as main candidates for the top women's prize this weekend.