The third EHF Beach Handball EURO was held in the Turkish beach resort city of Alanya. Since the 1990s the city has been become a hub for hosting beach sports, with beach handball and beach volleyball events held on the city’s beaches.

The competition attracted 15 men’s teams and 15 women’s teams from across the continent with 16 different nations competing across.

EHF President Tor Lian in his programme notes wrote: “I would like to take this opportunity, on behalf of the European Handball Federation, to say a big thank you to all those that have played such an active part in the preparations for this event – the Organisers, the Turkish Handball Federation, and the many volunteers who have put in so much time and effort in making this an unforgettable handball treat. Special thanks also go to the local authorities and business partners who has given their utmost support to his event.”

After winning silver in 2002, Russia stepped up to take their first ever men’s beach handball crown, beating Germany in the final.

The Russians won three of their four matches in the first stage, losing to Serbia and Montenegro, and then won four of their five games in the main round. They then fought back to beat Spain in a gripping semi-final shootout (2:1 – 10:17, 21:16, 7:4). 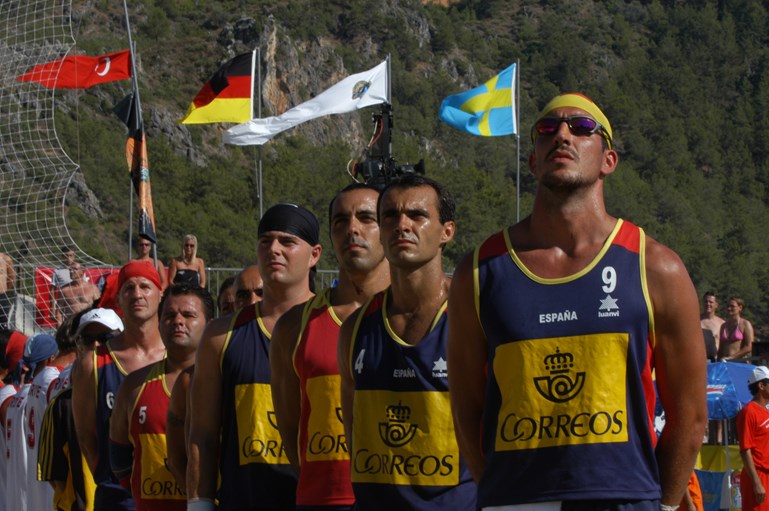 It was double delight for Russia as the nation also took the women’s gold medal. The Russian women’s team had extra cause for celebration as they made it back-to-back EURO titles following their win in Spain two years before.

They won five of their six games in the preliminary round and won two of their three matches in the main round.

Germany, fourth two years before, won the bronze medal, beating Italy in the third-place mach. Hosts Turkey, who were runners-up at the previous EURO, finished in fifth spot.

Eight players were recognised in the All-star Team, with awards for best player, best goalkeeper, best specialist and the topscorer. Recognise anyone?

Stars in your eyes

The Russian women’s team had a number of players who were with Rostov-Don at the time but the undoubted star of the EURO was Konstantin Igropulo, who was playing with Victor at the time.

The right back was just 19 years old at the time but would go on an become a huge star in handball, going on to win the EHF Champions League with Barça in 2011.  Igropulo also played for Medvedi Chekhov, Füchse Berlin, KIF Koding, Meshkov Brest and Wisla Plock.

Another absolute epic promotion video was produced by the EHF after the tournament was made. So sit back and spend 83 seconds watching the best dance moves from those in the crowd and the action on the sand in glorious technicolour.

A special European Championship because…

The tournament belonged to Russia, who swept all before them to win both gold medals and in the case of the women became the first team to successfully defend their title. Nice one.