The 10th edition of the event headed to Croatia for the second time, having hosted the event in Umag in 2011. With the Croatian men’s team having won the past four titles, all eyes were on the home side to make it five wins in a row in the capital, Zagreb.

The event was the first Beach Handball EURO under the presidency of Michael Wiederer.

The Austrian wrote in his pre-tournament notes: “With the intention of attaining the same success of the competition in 2015 in Spain, the 10th edition of the men’s and women’s European beach handball EURO will take place from the 20 – 25 June 2017 in City of Zagreb in Croatia at the Jarun lake, a popular tourist destination. Through concerted efforts to make this a truly unforgettable event, the Croatian Handball Federation welcomes you to the city next to the Save river, the biggest river in Croatia.

“We look forward to welcoming the participating teams to the 2017 Men’s and Women’s European beach handball EUROs; the competition will be played out in a dedicated event area. The event follows directly after the younger age category tournament.

“As it is not only the golden Championship plate up for grabs, but also a ticket to the 2018 Beach Handball World Championships it is expected that as the matches progress, the excitement for the fans will reach fever pitch as they root for their teams.” 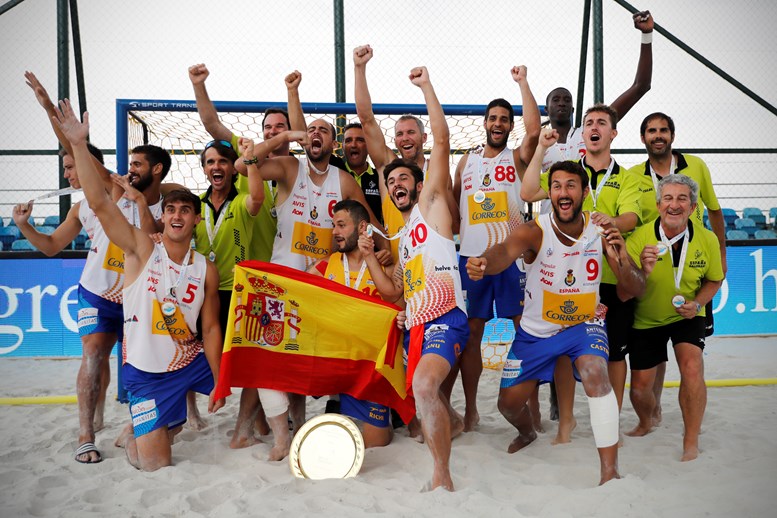 Having scooped the gold medal in the previous four events, Croatia were favourites to make it five in a row on home sand. However, the hosts lost in a dramatic shootout in the semi-final to old rivals Russia (who they had beaten in three of those four finals).

However, for the fourth time in five EHF Beach Handball EUROs, the Russians had to settle for silver as Spain claimed their third title (2002, 2006) winning 2-0 to spark wild scenes of celebrations. 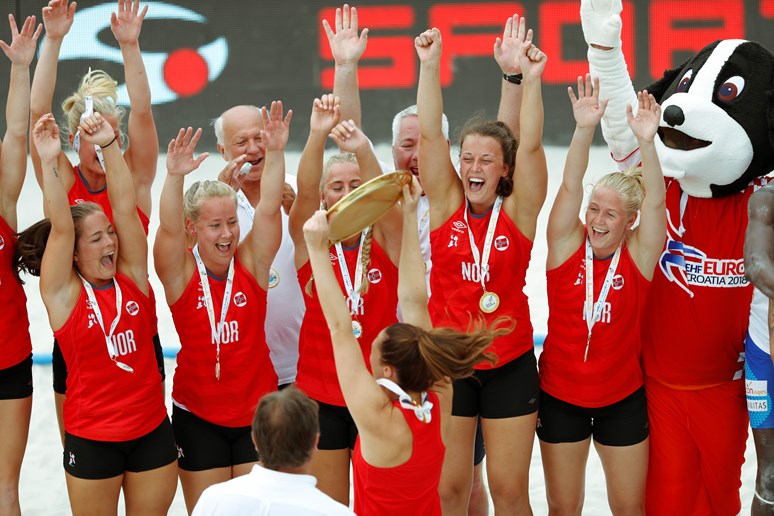 There was a new name on the famous golden trophy as Norway, after years of near-misses, finally lifted the title beating Poland in straight sets in the final.

The Norwegians had reached the semi-finals in all of the previous five editions of the EURO, but the best they could manage were two silver medals (2009, 2015). However, there was to be no mistake this time and after beating Spain – who they had lost to in the 2015 final – in the semis they overcame the Polish challenge 16:16, 19:16 to take top spot on the podium.

Spain recovered from losing in the semi-final to beat Denmark in the bronze medal match, winning 5:2 in a shootout.

It takes in all the important games, including both finals, plus the awards ceremony. There’s plenty of beach handball happiness to browse through.

There was plenty of analysis of the tournament, none more so interesting than Juan Carlo Zapardiel’s.

He reported: “Beach handball continues its unstoppable growth and there is increasingly more talk about its possible inclusion as an Olympic sport in the absolute category. The under-18s have already done so and beach handball will have its first appearance in the Youth Olympic Games in October 2018 in the city of Buenos Aires.

“In general, we could evaluate the European championships very positively. We would highlight that the overall speed of the game has increased and that the technical quality of all the players continues to grow to a great extent. The younger ones are a clear example of this. One of the reasons may be that these generations are learning at the same time the specific technical skills of handball and beach handball.”

The All-star Team saw six players and two federations awarded for their efforts and fair play.

Croatia might not have won gold, but they won the hearts of everyone as hosts with their love and passion for beach handball and hospitality.