The 11th edition of the event headed to Poland for the first time with Stare Jablonki hosting the event. A village of 700 people (here we go, thank you, Wikipedia), it lies in the administrative district of Gmina Ostróda, within Ostróda County, Warmian-Masurian Voivodeship, in northern Poland and lies approximately 8 kilometres (5 mi) east of Ostróda and 29 km (18 mi) west of the regional capital Olsztyn.

Lying by lake Szeląg Mały, it was been a popular location for international beach tournaments, including beach volleyball, which hosted the 2013 world championships.

Writing in his magazine foreword, EHF President Michael Wiederer said: “For the latest instalment of beach handball action, we return to a country steeped in a rich history that celebrated its handball centennial on 26 October 2018, and to the small village of Stare Jabłonki located in the North-Eastern part of the country. Having hosted the finals of the men’s and women’s European beach tour in 2018 Stare Jabłonki has been making a name for itself when it comes to this popular sport, as now in 2019, it will host the beach handball EUROs for the very first time!” 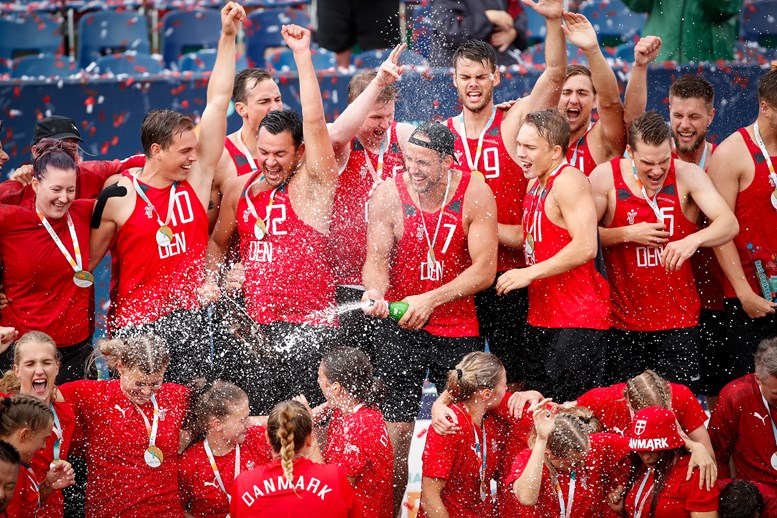 Having only ever reached the semi-finals of the competition only twice before, Denmark shocked the beach handball world by winning their first medal in the men’s competition.

After getting through the preliminary round and main rounds, the Danes beat France in straight sets in the quarter-final before recording another 2-0 win, this time over Hungary, in the semis.

Their opponents in the final were near neighbours Norway, but another straight sets win (25-18, 19-16) secured the Denmark the title.

In the bronze medal match Hungary banished the bad memories of back-to-back fourth-place finishes in 2015 and 2017 to beat Russia 2-0 and fill the final position on the podium. 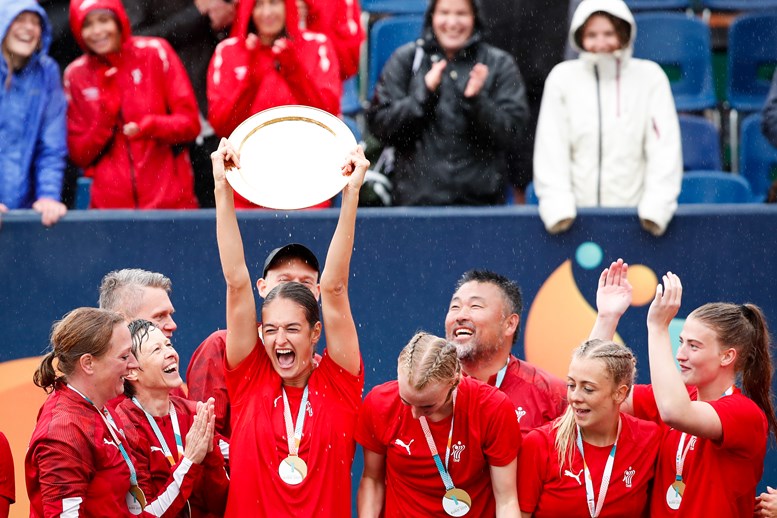 Well, well, well… Denmark secured the title beating Hungary in a thrilling final to make it a golden double celebration in Stare Jablonki.

Denmark lost just one of their first nine matches across the preliminary and main round which earned them a quarter-final tie against Norway. In a thrilling game, the Danes progressed to the last four courtesy of a 7-6 win in a shootout.

There was more drama in the semi-final against Croatia which also went the distance but for the second tie in a row, Denmark were too strong when it mattered most in the shootout.

Hungary – winners as recent as 2013 and 2015 – were the Danes’ opposition in the final. This time there was no shootout as Denmark won – taking the second set in the tightest of margins, scoring a goal in the last seconds to win 23-22.

In the battle for bronze, the Netherlands won their first ever medal an EHF Beach Handball EURO, getting the better of Croatia.

For the third time in the history of the competition, one nation won both and men’s and the women’s gold medals. Denmark followed in the footstep of Russia, in 2004, and Croatia, in 2011.

Check out the top five moments from the finals that saw Denmark celebrate gold in both competitions.

It was hard to ignore the Danish’s achievements winning gold, but the Netherlands were also celebrating a first-ever medal at the beach.