Düsseldorf, Berlin, Mannheim, Munich, Hamburg and Cologne will welcome Europe’s handball elite for a month of spectacular action from 10-28 January 2024.

For the opening match of the competition in Düsseldorf, the German Handball Federation is attempting to break the world record for the number of fans at a handball match. The curtain-raiser will be played inside the city’s 50,000-seater stadium usually used to host football matches and concerts.

Among the venues for the preliminary round matches are Berlin, Mannheim and Munich, while main round matches will head to Cologne and Hamburg. The LAXNESS arena in Cologne – arguably Europe’s most well-known arena for men’s handball – will then host the final round where the winners will be crowned.

The German national handball team will begin its path in Düsseldorf, before contesting the preliminary round in Berlin and then, if successful in Cologne in the main round. 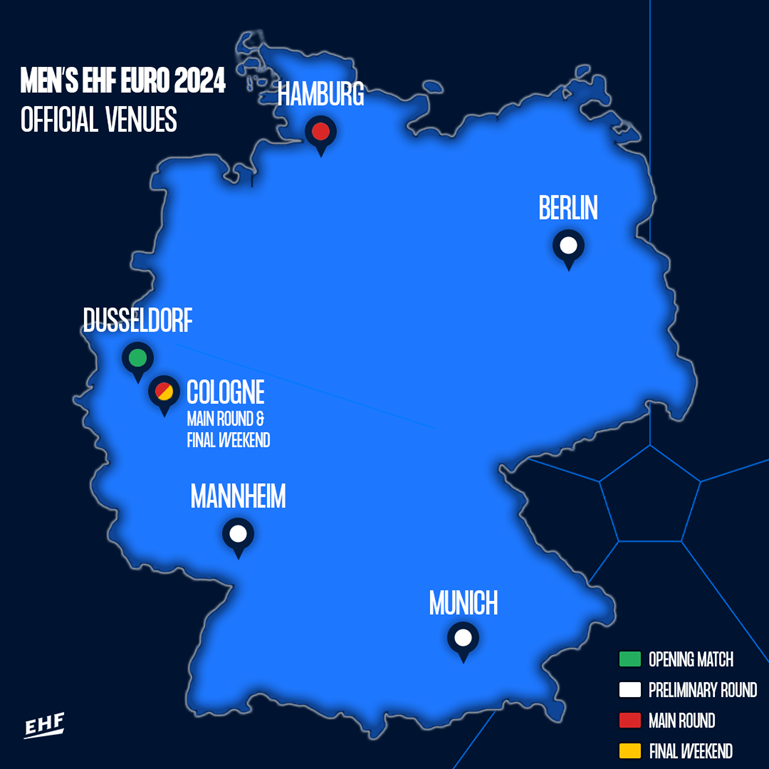 EHF President Michael Wiederer said: “The EHF EURO 2024 will not only be a massively important event for the status of handball but also for the future of the sport.

“Some of the best handball halls are in Germany and the German fans are known as among the most enthusiastic and knowledgeable in the world.”

Andreas Michelmann, President of the German Handball Federation, said: “This tournament will be a beacon in the handball decade. We are already looking forward to it.

“We have succeeded in distributing the locations of the Men’s EHF EURO 2024 almost across Germany so that we can offer handball a platform everywhere. At this point I would like to thank the other venues, who invested a lot of energy and applied, but unfortunately did not get a chance this time.”

Mark Schober, Chairman of the Board of the German Handball Federation, said: “We are planning the opening game in a football stadium. With 50,000 fans and a successful world record attempt, Düsseldorf should set the framework for a fantastic men’s EHF EURO 2024.

“All arenas hold more than 10,000 spectators. We want to build a great stage for the participating teams and their fans and for all those interested in handball.

Martin Hausleitner, EHF General Secretary, added: “The Men’s EHF EURO is the undisputed flagship of our national team competitions. It inspires hundreds of thousands in the halls and millions in front of the television screens, and it is the platform for our sponsors and partners. The EHF EURO 2024 in Germany has all the prerequisites to set new standards and records in these areas. We are very much looking forward to working with the DHB.”

Programme 2024: main round and final weekend

Previous Article This is Me: Mikkel Hansen

MEDIA RELEASE: 500 spectators can be present inside LANXESS arena for the highlight event of the club handball season.

MEDIA RELEASE: The DELO EHF FINAL4 enjoyed impressive exposure across the world, most notably in Norway

MEDIA RELEASE: The world of handball will be at users’ fingertips with the EHF’s new ‘Home of Handball’ app

EHF teams up with VOGO for next step in referee communicatio…

MEDIA RELEASE: With a plethora of technical features, the new VOKKERO communication system has the potential to become a 'game changer'.

MEDIA RELEASE: From the Remote FAN SHOW on Twitch to an interactive magazine, handball fans can consume a host of rich digital content this…