Before Sunday’s final of the EHF Champions League Men, Barça and Lomza Vive Kielce were level according to the statistics. This was exactly what was seen in the EHF FINAL4 2022 decider, which was still tied after extra-time and the Catalan club only won after a penalty shoot-out.

Kielce went into the game with a similar game plan as they had against Telekom Veszprém HC in the semi-final and in many other games this season. They tried to slow the game down, control the pace and thus the game. Against Veszprém, Kielce’s possessions were 10.3 seconds longer than their opponents (Veszprém 29.6 seconds, Kielce 39.9), which is a remarkably high difference.

Since Barcelona has been known to play a similar fast-paced style as Veszprém (they had the third shortest possessions this season, Veszprém the shortest), Talant Dujshebaev tried the same approach. Their possessions were even 11.6 seconds longer than Barça’s, which is the eighth highest difference in 127 games this season. In total, the Polish champion had almost 11 minutes longer possession of the ball than Barça.

For Kielce, however, fortune favoured the bold. While the defending champions had only one offensive rebound, they had eight and thus were able to rectify their surplus of turnovers.

And in keeping with the evenly matched teams, the shooting percentages were also the same for both teams in the 70 minutes. Both had 62.7% successful throws and thus 29.1 goals per 50 possessions.

All these are relatively average numbers for both teams this season. On the one hand, this reflects the very even game, on the other hand, this was also to be expected in advance due to the very even statistics.
Before the final, the Polish club had slightly better numbers in attack with 30.5 goals scored per 50 possessions compared to Barça’s 28.8. Barça, on the other hand, clearly had the best defence in the competition with only 25.8 goals conceded per 50 possessions (including the lowest shooting percentage allowed, highest save percentage and most turnovers faced), while the Kielce conceded 27.9. 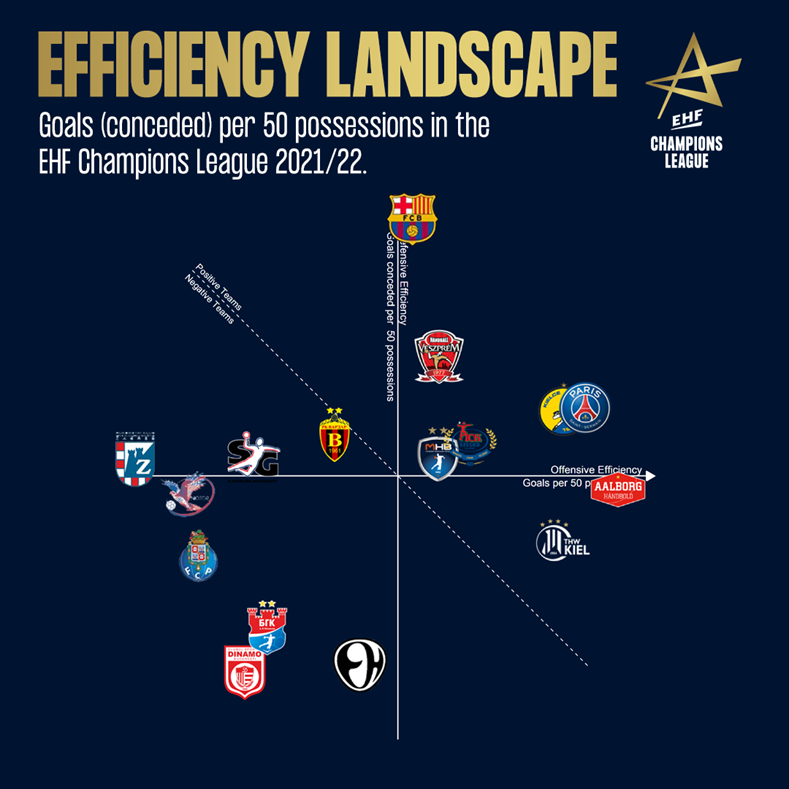 Of course, the fact that the statistics of the two teams are already equal before the match does not mean that it can be assumed that the match will go into extra-time. On the contrary, there is usually so much statistical variance, chance and luck involved that this is not the case.

But that was not the case in the final. So, it came as it had to come and the game went into a penalty shootout.

Looking at the statistics of the games before the final the favourite was clear. Kielce had the worst penalty scoring efficiency of all EHF Champions League teams this season, scoring on just 63.9% of their attempts. That is even worse than their field goal shooting percentage. The Spanish champions, in turn, were the third-best team with 79.6%.

But of course, their good percentage stemmed from their first choice penalty taker Aleix Gómez, who shot just about every time for them. The right wing was not just the top scorer of this season with 6.1 goals per game. He also scored on 82.0% of penalty throws taken (excluding shootouts). This made him the second-best penalty shooter this season after Mikkel Hansen.

Kielce, on the other hand, had tried different shooters again and again but had not found one they could completely trust. In the decisive penalty shoot-out, however, all this played only a subordinate role.

In the end, it was again variance, chance and luck that lead to the first back-to-back winners at the EHF FINAL4 in Cologne: Andreas Wolff got a touch to the first two shots but could not keep them out, while Gonzalo Perez de Vargas was able to make the one decisive save against Alex Dujshebaev. 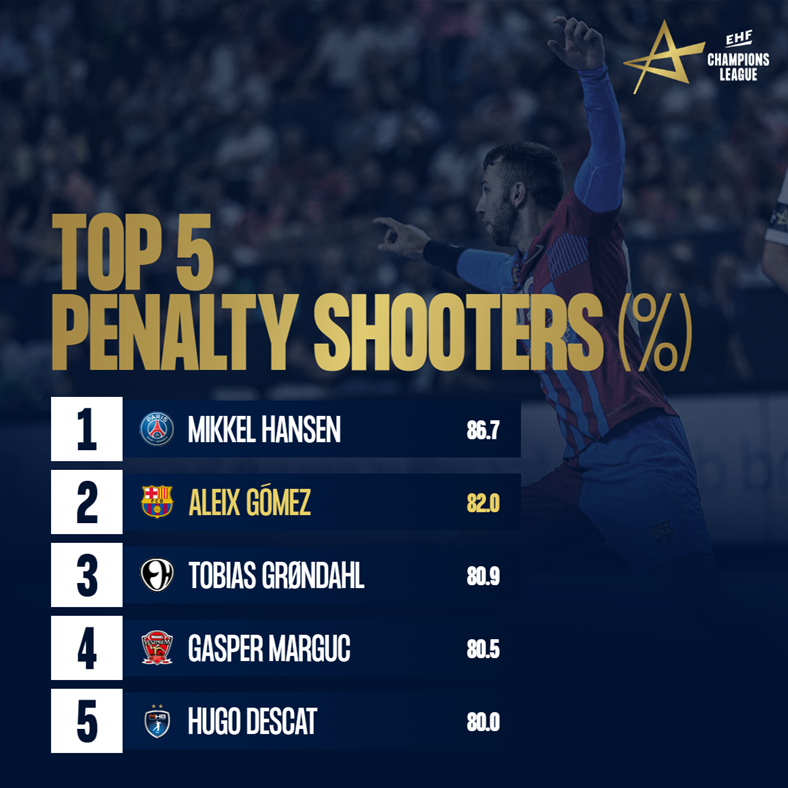 Next Article This is me: Ludovic Fabregas

Wisla Plock ready for the next step

COUNTDOWN #9: Orlen Wisla Plock (POL). The Polish side is back in the top flight after two straight EHF Finals appearances

Bietigheim return with a mission

COUNTDOWN #7: SG BBM Bietigheim (GER). The German champions are coming off a perfect season in all competitions

COUNTDOWN #10: FC Porto (POR). The Portuguese champions have been in the knockout phase in the last three seasons

COUNTDOWN #8: Odense Håndbold (DEN). The Danish champions want to get to the quarter-finals at least

COUNTDOWN #9: FTC-Rail Cargo Hungaria (HUN). The Hungarian side start another attempt to reach the season highlight in Budapest

COUNTDOWN #10: Krim Mercator Ljubljana (SLO). The former two-time champions are ambitious after their 2021/22 run to the quarter-finals

“Europe will see who Rapid really are”

Czech champions making the Most of it

COUNTDOWN #12: DHK Banik Most (CZE). Most return after three seasons, facing a challenge with limited experience in the top tier